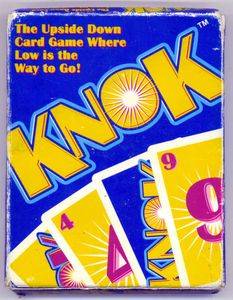 Knok, the upside down card game where low is the way to go. Two decks, each with 54 cards; twelve 10's, six 0's and four each of 1's to 9's. For each hand, players are dealt four cards which are placed, face down, on the table in front of the player. The player may look at face of only two of their cards. On their turn, players my take the top card from the discard pile or the draw pile. The player may exchange the drawn card with any of their four face down cards. The unwanted card is placed, face up, in the discard pile. The goal is to collect the lowest set of four cards at the table. If the player believes he/she has the lowest total, they say "knok"; play ends at this point and all players' cards are revealed. If the "knoking" player owns the lowest total, they receive 0 points and all other players receive the point total from their four cards. If any other player ties or is lower than the "knoking" player, the knoking player receives all of the points of his and the other players cards, the non-knoking players receive 0 points. Nine hands are played to complete a game.