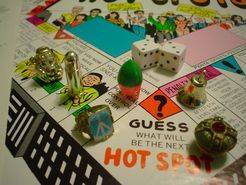 From the instructions: "The object of the game is to keep your political conflict going while every other player has ended his conflict. There is only one winner. This person wins because his political conflict is still in existence, and the money, planes, and soldiers that go with is will boom his economy. When the conflict ends, the soldiers, planes, and most of the money usually end also. Whoever ends his conflict loses the game." Role and move game where players try to escalate political conflict by landing on the right squares and collecting cards granted by landing on the correct squares.