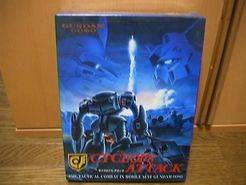 Tactical level wargame based on Japanese robotech animation Mobile suit Gundam &amp; Gundam 0080: War in the Pocket. New Gundam game with emphasis on command. Players control small size force with 1 to 9 “mobile suits” (giant robots). At the beginning of each turn, players assign a command to each platoon. The game includes thirteen commands. For exmaple, reorganization, suppress fire, support fire, advance or combined movement. Then, determine the initiative, and then alternately activating their units. During activation, the unit can benefit from assigned command. The game contains five scenarios based on the story, the basically purpose of the scenarios is the destruction of enemy forces. However, the main issue of this game is the campaign game. In the campaign game, players manage their own force by appoint the pilot and purchase the mobile suit. The battle resolve as normal game. Between in the battle, growing the abilities of the pilot by combat experience, do the repair and replacement of the Mobile suit. As a small drawback, fighters and tanks, are not included in this game.