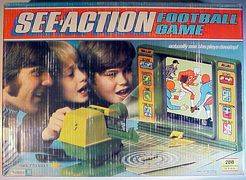 Strategy combines with visual gimmicky in this title. Each player (offensive and defensive) secretly chooses a slide depicting their play choice, and one player sets the randomizing knob on the game's slide projector. They then view the two overlaid slides which produce an image of the play in progress, moving them through until a yardage/penalty result shows up at the bottom of the screen. Standard scoring rules for American football apply. At least two editions of the game were produced. The first edition in 1973 had no official tie ins with the NFL. It provided 25 "team" markers listing the host city for each NFL team of the day, replacing "New England" with "Boston" and only giving one marker for "New York". A later edition featured O.J. Simpson on the box cover and the game was retitled accordingly.