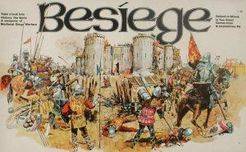 BESIEGE is an interesting game of strategy and skill, where players can choose to be either the defenders of a castle, or the attackers trying to scale the walls, or batter down the gates. No dice are involved - movement and combat is decided by cards held by the players. The interesting part is in deciding when and where to play specific cards. In addition to the various siege weapons, the players must contend with dwindling water supplies and disease. The game provided an interesting insight into the mechanics and psychology of siege warfare, while remaining an easy to learn, and fast paced game. The game actually contains two separate versions of the game - a quick and easy version for younger players, together with the full-length version.