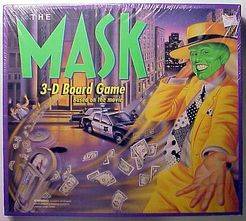 This track game is based on the Jim Carrey film "The Mask". From the rulebook: "Stanley Ipkiss just tried on an eerie old mask he found in the river--and started to spin 'round like a whirlwind until he was transformed into ... The Mask! During all the commotion, Stanley's Pajamas, Clock, and faithful dog Milo whirled right out the window, and they've landed all around the city. Plus, The Mask did something bad: he went out and robbed a bank! Stanley better hurry up and collect his stuff--and get that money back to the bank!" On your turn, you roll the die and move the number of spaces indicated. If you land on a space with a chip, you turn it over, and if its an item of your color you keep it. If you land on The Mask space, you place the mask piece over your playing piece (like a hood) and become The Mask. This gives you special powers including: the ability to ignore the die and move to the space you want, and ability to land on opponent's starting space and return a color chip back to the track. As soon as another player lands on the mask space, you have to remove the mask from your mover and give it to your opponent. The first player to collect and return all 4 missing items of his or her color wins.