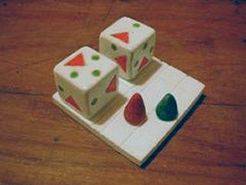 Bushi Shogi is a Shogi variant played by two opponents on a field of two cells, with two pieces called Samurai. The pieces are cubes with kanji in red for 'samurai' and kanji in black for 'sword' on each face. The playing field starts empty. Each player receives one Samurai and, beginning with Black, drops them onto their respective cells in turn. Such placement must be so that the upward face of the cube does NOT present a 'sword' kanji toward the opponent. Movement consists of either rotating the cube one face clockwise, rolling it forward one face toward the opponent, rolling it left one face or rolling it right one face. The upward face of each cube controls the play of the game. If an opponent cube presents an upward face which has a forward 'sword' and the upward face of the player's cube does NOT present a forward 'sword', the player must rotate only. If an opponent cube presents a 'sword' forward, and the player presents a 'sword' forward, the player must roll the cube directly away from the 'samurai' kanji on its upward face. The game is won by the player who is able to present an upward face with a forward 'sword' and a rearward 'samurai' when the opponent cube also presents a forward 'sword' with a rearward 'samurai'. The 'samurai' are considered to be facing each other with their 'swords' met.