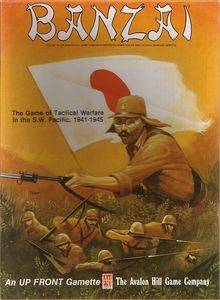 | The Avalon Hill Game Co | Wizards of the Coast

Banzai expands upon 1983's most innovative and acclaimed game system to bring the steaming jungles of the SW Pacific to your gaming table. The mystique, incredible courage, and tragic flaws of the Japanese soldier are vividly portrayed in the tense, exciting games of simulated man-to-man combat which only Up Front presents in such panoramic splendor. Owners of Up Front will find the game system extensions included herein to be the ultimate of simplicity and convenience; while adding rich detail to the portrayal of the Japanese and British nationalities, as well as accounting for American marines. Twelve new scenarios depict not only typical SW Pacific encounters, but allow more variations for Up Front's existing European scenarios as the British take on the Germans, or the Russians test the Japanese in Manchuria. Several new scenario types list European variations, thus expanding the scope of Up Front's possible encounters. And of course, the complicated T. O. &amp; E. and capabilities of the new nationalities have been distilled into the eminently playable Personnel cards of the Up Front game system. Contents: 1 Rule Book (Contains 12 Scenarios) 63 Counters 60 Personel Cards 20 AFV Cards