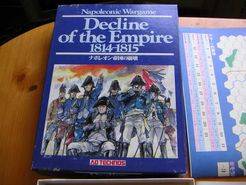 SGB-13 Decline of the Empire 1814-1815 (1986) (JPY 6800) DotE contains one map, stretching from Dunkerque and Paris on the west edge to Roermoon and Luxemburg City on the east edge. There are 756 counters, along with 8 PAC, many of them off-map strength tracks. There is a 28 pg rulebook and a 24 pg Historical Notes booklet. This is nothing more than a modified version of Kevin Zucker’s “Campaigns of Napoleon” system, period. The differences I can see are not using individual combat units with historical IDs, instead the designer chose to use icon units (such as artillery or infantry) combined with strength point markers to go underneath. Also, leaders are not on the map and forces are represented by numbered force markers instead. There is an AP Table, but no Attrition Table. The CRT is vastly different, with the addition of negative numbered results and ‘D’ and ‘DD’ results (would sure like to see those!). There is also the ubiquitous Paris Morale Track.