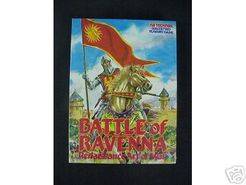 SGB-12 Battle of Ravenna (1985) (JPY 5,800) Subtitled “Renaissance Art of War.” One die-cut mapboard (22 x 34”), one sheet of counters, one roster pad of double-sided sheets, one PAC, one 40-pg rule/scenario/historical booklet (4 scenarios) and one strange little d10 (it has almost 14 sides, but only ten numbers). Only about 20 pgs contain the actual rules. The game appears to cover only one battle, broken into four scenarios with the campaign game being the last. Battle of Ravenna is unique in that it is the only Ad Technos game to ever have a mounted mapboard. It is very similar to what Avalon Hill used the early 90’s with similar results (bowing of the map). The counters each have five numbers on them-firepower, melee, movement and some sort of morale values (written as either + or -). There are a bunch of strength point counters as well to go along with the roster sheets. Most of the counters are in Japanese script. Units must face a vertex, with limited front facing allowed depending on the unit type. Many of the rules look to involve the firing and targeting of the various units, including cavalry charges and the ability of units to react to that.