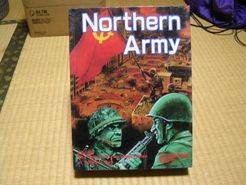 SGB-25 Northern Army (1987) (JPY 4800) Subtitled “Self Defense Force Series-02” and “The Soviet Direct Aggression at Ishikari Bay”. One and a half maps, 504 counters, four PACs (two identical), a Series Rulebook (12 pgs) and an Exclusive Rulebook (24 pgs). There looks to be two scenarios. Unit sizes are companies for the Japanese and battalions with some companies for the Soviets. Turns are 6 hours and run the first seven days of the invasion (28).