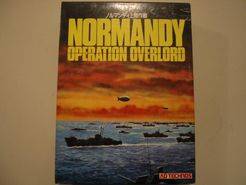 SGB-8 Normandy Operation Overlord (1985) (JPY 4300) Two identical 11x17” maps, two 11x17” color PAC (one for each player), one PAC, 504 counters, 24-pg. rulebook. Only the historical scenario is presented. The game takes 32 turns. Units are divisions with no combat values. Each division has an associated marker for use on the PAC. The player’s PACs are tracking intensive, recording supplies, combat efficiency, reinforcement appearance, and much, much more. Many of the rules cover the interaction of the markers on the PACs during combat. I imagine most of the ‘game’ here is managing your PAC correctly vis-à-vis the map. Other counters include DD tanks, commandos, coastal artillery, strong points, naval bombardment and TAC air markers and a whole handful with Japanese text (which is somewhat rare in Japanese games actually). This game is way up on my list of games needing translation. It almost looks like one of the old double-blind games (with the two identical maps), except that there are no apparent rules for those procedures. Maybe I received an extra map by mistake? A very interesting-looking game indeed.