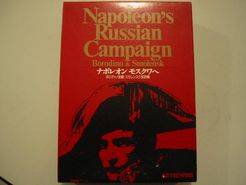 SGB-7 Napoleon’s Russian Campaign (1985) (JPY 6800) Subtitled “Borodino &amp; Smolensk.” NRC includes one mapsheet (back printed), 504 counters, one 24-pg rulebook and two (one 32-pg and one 44-pg) historical booklets. Turns are hourly and there is no indication of hex size. Combat units are brigades and divisions with separate leaders. Leaders have four numbers on them (?) while combat units only three (combat, morale and movement). The CRT is by strength point losses and there is a demoralization track as well for each side. The map terrain and its effect chart look very similar to SPI’s old NAW system, with a little more chrome. There are additional rules for fortifications and bridges also.