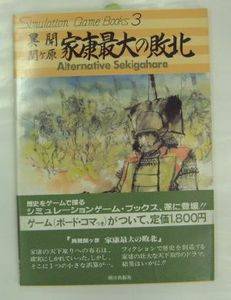 SGB-3 Alternative Sekigahara (1983) (JPY 1800) The first six pages cover the events leading up to the battle, while the next 12 pages cover the rules of the game and the rest are a detailed description of the participants involved. The map contains four 11x17” pieces, making one whole map together. The map does not use full-hex terrain symbols but does include a vast array of set-up boxes for the different clans involved. As its name implies, this is a alternative history of the Battle of Sekigahara in 1600. The counters have a combat and movement value with some of the troops having their combat number in parenthesis (the musket-armed troops I bet, but there does seen to be a lot of them). There is a neat time spiral in the middle of a roster page (what is recorded there, I have no idea), as the CRT is a ‘push-style’ one, with the results of ‘AD’, ‘AR’ ‘Eng’, ‘DR’ and ‘DD”. Apparently the game lasts twelve turns, but there is no indication of turn length, map or unit scale.