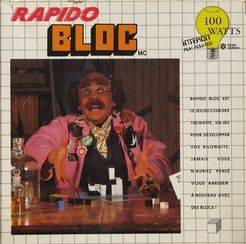 Rapido Bloc is a game from "Le Club des 100 Watts". The goal of the game is to build 3-dimensional structures faster than the other players. Each structure can contain up to three kinds of blocks: white cubes, black cubes, and black quarter-circles. Each structure is shown on four identical cards in three views: top, front, and right. Players all take the same card and simultaneously try to build the structure on their own boards. The first player to complete a structure gets two points, unless they make a mistake in which case everyone else gets one point. There are four sets of challenges of increasing difficulty. Each set has twelve different challenges. The quarter-circle blocks can be tricky to put in place and in harder challenges you need to hide some blocks to get the right view!