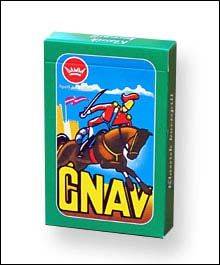 A classic game with roots back to 15th. century Italy, where it was called Cuccu. 300 years later it came to Scandinavia under the name Gnao. Slabberjan is a Dutch game that is similar to Gnav This is a well-known game in Norway, and can be played with cards or beautiful, hand-made playing pieces. The cardgame is actually Damm's oldest game that is still in print. Players are each dealt a random card with a rank, which they keep face down. There is a round of trading, in which you may force a trade with a neighbor. Some cards trigger special effects during trading. After the trading, the worst card loses the round. The heart of the game is in judging whether or not to do a forced trade in the interest of being not-worst.