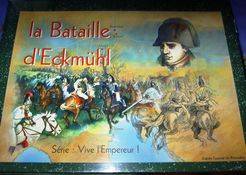 It is nearly noon, 22nd April 1809, and still no news from the Emperor. You, Marshal Davout, best French leader and victor of Auerstedt, carefully listens to the thunder of artillery which, from the South, shall indicate that the battle has begun. For the moment, you must hold with two divisions.. but others are joining, with your German allies from Bavaria and Würtemberg. In front of you, two Austrian corps stay idle, seemingly hesitating between staying there or retreating towards Ratisbon. What has your opponent, Archduke Charles, have in mind? A game of the "Vive l'Empereur" series from Azure Wish on regimental scale. The series using standard rules and a set of exclusive rules specific to each battle. The game contains 332 counter, 1 Map, 2 Rules booklets. Gamesystem: - scale = 250 m/hex; - time = 30 min/GT; - strength = ~600 men/counter (Reg/2xBatt)