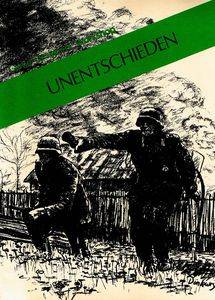 Introduction: Unentschieden! (Europa II) is an expansion for Drang Nach Osten! (Europa I), an historical game/simulation of the German invasion of the Soviet Union on 22 June 1941 that lead to the gates of Moscow and ultimately to the destruction of the Wehrmacht and the fall of the Third Reich. Drang Nach Osten! carries the Russian campaign from June 1941 to the end of the Soviet winter counteroffensive in March 1942. Unentschieden continues the campaign through 1944-45. The two games together comprise the entire War in the East, 1941-45. Game Components: Four partial mapsheets (numbered Europa 6 through 9). Two 10" x 27" and one 8" x 27" mapsheet extending the DNO map to the east One 27" x 13" mapsheet estending the DNO map to the south &amp; east One set of six supplementary unit countersheets (for a total of 2128 counters) consisting of: One Europa sheet 6 One Europa sheet 7 Two Europa sheet 8 One Europa sheet 9 One Europa sheet 10 (partial sheet) One rules folder and cover. One set of supplementary charts and tables. One Soviet Initial Order of Battle One Soviet Order of Appearance One Soviet Unit Substitution Chart One German Initial Order of Battle One German Order of Appearance One German Unit Substitution Chart Notes: Ground units are Army HQs, Divisions (and Soviet Tank/Mechanized Corps), Brigades/Regiments, and Battalions. Air units are groups of 40-60 aircraft. Unentschieden adds more unit specialisation, although at 26 pages the combined rules are still quite manageable by today's standards. Drang Nach Osten! with Unentschieden lasts for 52 half-monthly game turns (Jun II 41 through Feb I 45) so allowing for one session of several hours per turn, several hundred hours is a realistic playing time.