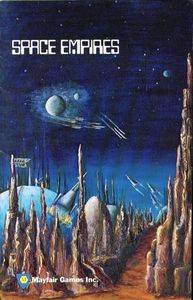 Back Cover Blurb The decline of the Koranelan Empire led to numerous confrontations between neighboring star systems for the domination of their sectors. Lead your fleets in battle to conquer the universe. Space Empires is an intriguing multiplayer game of interstellar conflict. The special weapons and abilities of the contending races give this game a unique flavor. Rulebook Excerpts The conflict begins as players build armadas of Starships to conquer worlds. The player's purpose in Space Empires is the imposition of his form of government on other alien races and to gather new allies in the conquest of the known universe... A player wins the game by controlling seven or more races for two consecutive victory phases . . . Alternatively, the players may agree on a time limit, the player at the end of the game with the most races wins, with ties being resolved in favor of the player with the highest production point total . . . Any other result is a draw. User Summary A relatively simple hex-and-counter game of space conquest in a galactic zone populated by twelve alien races. Players seek to expand their control over the star systems scattered across the map. This increases the player's production capabilities which allows more starships to be built. The interesting twist, sort of a Cosmic Encounters "lite," is that each alien race has a special ability. When a player conquers the home world of an alien race, the player can then start building starships for that race. The special powers of the alien starships include the paralyzing ray of the Amoebas, the Gort repulsion field generator, Parasite energy absorption, and the cloaking device of the Slinkers.