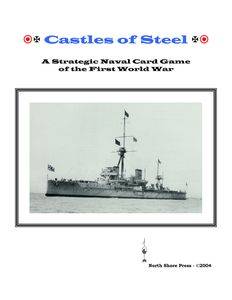 Available as a free download from its Yahoo Group. (http://games.groups.yahoo.com/group/dubious-designs-2.) Card driven game of the naval campaign between England and Germany in the North Sea in WWI. Cards allow actions to be taken, such as Convoys, Sorties, and Torpedo Attacks. Cards include the fall of Russia and a possible German take-over of the Russian Fleet, and several British offensives that were never undertaken. Battle is resolved with counters and dice with each counter representing two or more battleships. Battle cards allow for surprise results: Fog and Mist, Night Attacks, Crossing the T.