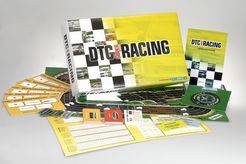 Basic racing game based on the Danish Grand Prix. The DTC Super Racing game is the official DTC (Danish Touringcar Championship) board game. Everyone can participate; the game is for contest minded people who like to make a good deal and control the game! Hire drivers and participate in DTC races, as well as buy shares in the different companies, so you, after all completed races, have the biggest fortune. You have possibilities to make profits on your drivers, your companies and the other companies you have interest in. The game can be played on the four official DTC tracks; Ring Djursland, Padborg Park, Ring Knutstorp and Jyllands-Ringen. You are the manager of one out of five teams (Essex Invest, Honda, Peugeot Sport, Toyota and Volvo) and you manage your team with the official racers from the season, including Jan Magnussen (also known from Corvette's Le Mans 24h race). The drivers race in four groups (A, B, C and D Class) and can also ride in a Free-Class race where all drivers can be used. Each driver has pre-determined number of moving spaces for each turn, which is written on its information card. Every race cost 2,000 per car to participate in, and there are prizes for number 1 to 4. The money can be used for betting and improvements. The winner is the player who has collected most values in money, drivers, shares in a syndicate and obligations after the 8 races, which are run depending on which type of drivers, who are eligible for each race.