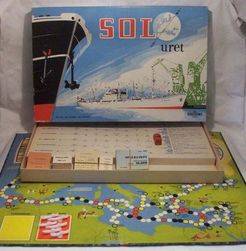 Theme As a captain on your own vessel, you sail your ship to the Mediterranean following actual routes, namely those of the Swedish Orient Line. Circumstances sometimes force you to change your course. It may be expensive, but it may also be profitable. Whatever the cost, you have to return to and complete your route: that is something neccessitated by the service. In the Mediterranean and Black Sea ports you also act as business man and buyer. You may have successful business – and you may meet with difficulties – while buying the goods you will carry to Sweden or some other Northern European country. With a little concentration and some good luck – here as in reality the risks may be reduced and possibilitis of profit increased. Gameplay Players engage as a ship's master and take turns to roll two dices to move their ship along different paths in the mediterranean. Each player must aquire 5000 tons of cargo divided into five different goods (1000 tons each) from the harbours around the mediterranean. Players also sail during different seasons of the year and the goods requirement will differ (e.g. one player needs raisins, oranges, nuts, cotton, and tobaco while others need other goods). The types of goods are spread out at different ports and as only half of the requirement for each product can be loaded at the same port, the players will need to visit more than five ports to fulfill their requirements (with some exceptions). The game becomes a task of route optimization to visit the neccessary ports with the least number of dice rolls. Along the way sailors run the risk of encountering storms, price changes on the goods exchange, and random events received via telegram. When all goods have been aquired the players must sail back to Sweden and sell the cargo in Gothenburg and Stockholm (half in each) according to current prices on the goods exchange. The first player to finished selling all their goods ends the game. Goal The player with the biggest fortune in cash and goods at game end wins the game. Goods still on the ship will be worth according to current prices on the goods exchange, however, players that have not returned to Sweden will lose money for each product missing from their required goods. Background Soluret was released by Alga in 1958 during a jubilee for Broströms shipping company. —user summary