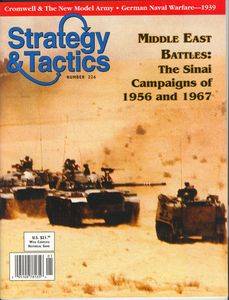 The Middle East Battles: Suez '56 &amp; El Arish '67, are two games in one that depict an operational simulation of mid-20th century warfare in and near the Sinai peninsula. Both games in the system represent, in two-player format, a clash between two or more of the important military powers in that region during the middle third of that century. The playing pieces represent the actual units that participated, or could have participated, in those battles, and the maps show the militarily significant terrain over which the units fought or could have fought. The El Arish '67 battle game simulates the initial Israeli onslaught into the Sinai, which led to their spectacular triumph over the Egyptians a few days later. This opening battle could've gone much better for the Egyptians. They had actually planned a strong mechanized counterattack, but their high command lost their nerve at the last moment and ordered a general withdrawal instead. In the game, the Egyptian player has both those options available to him. Published in Strategy &amp; Tactics magazine #226 - Jan/Feb 2005. Game Scale: Game Turn: 6 hours Hex: 1 mile / 1.6 kilometer Units: Company to Brigade Game Inventory: One 22 x 34" full color mapsheet One dual-side printed countersheet (280 1/2" counters - 110 for El Arish '67, 101 for Suez '56, 30 errata/variant for The East is Red, 39 errata/variant for Dixie) One 16-page Middle East Battles rulebook Solitaire Playability: High Complexity Level: Medium Players: 2 or more Playing Time: 2-10 Hours