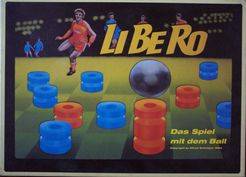 Abstract Soccer Game played on a grid of squares. Each player has eleven wooden tokens - nine basic ones, one libero (sweeper) and one goalkeeper. Each piece has a small dent on top so the ball can be placed on it. In a turn, the active player can pass the ball as many times as s/he wishes, in a straight unblocked line (diagonal, too), and move one piece. Regular pieces move any distance diagonally, while the libero can move orthogonally as well (same as the goalie, who is restricted to the box, though). A piece that reaches a field adjacent to an opponent piece with the ball can grab the ball. Goals can be scored if a piece that is not offside can play the ball into the goal in a straight line. One half time is played until a player has scored three goals. After two half times, the player with most goals is the winner (in case of a tie, an extension is played).