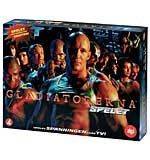 Based on the Swedish version of the TV show "American Gladiators", where the players compete in different activities. The game is for 2-4 players and is played out over 7 rounds, each one represented by a different minigame. In a two-player game the players take turns being the challenger or the gladiator. If the challenger defeats the gladiator in a turn they get markers/points which are used in the last turn. The winner of the last turn is the winner of the entire game. The different minigames Gatloppet (The Gauntlet) In the Gauntlet the challenger tries to outwit the gladiator, while the gladiator tries to predict the challenger's next move. The challenger starts the game by picking cards of two different types. They then play one card at a time, the gladiator trying to match them. The challenger gets to move forward every time the gladiator fails to predict which card the challenger played. If the challenger gets to the finish line before running out of cards, they have won the round and get points depending on how many cards they have left in hand. Duellen (The Duel, orig. Joust) The Duel is a card based color matching game where the players simultaneously try to build ladders by combining cards with the same colored symbols on them. The game ends when one player can't continue their ladder. Points are awarded depending on how many cards are left in the player's hand, less than 5 yielding the maximum score. The challenger won't get any points if the gladiator finishes their ladder first. Ringarna (The Rings, orig. Hang Tough) The Rings is a tactical challenge played out in six turns. The challenger must move over to the gladiator's space or reach one of the eight scoring squares by playing movement cards. The gladiator's role is to catch the challenger by ending up on their space or to prevent them from reaching the score tiles by blocking their path. Väggen (The Wall) In the Wall the challenger tries to reach the top before time runs out or the gladiator catches them. It is played out over seven rounds. In each round the challenger calls out how many spaces they want to move in that turn. They then spin a spinner numbered 1 to 12. The challenger gets to move if the spinner shows the same number or higher. In round 4 the gladiator takes up the chase following the same movement rules but using the gladiator's spinner numbered 4 to 15. The minigame ends after seven rounds or after the challenger has either been caught or reached the top. Rekylen (Recoil, orig. Snapback) In Recoil the challenger tries to steal markers from the game board by moving their piece to the desired color. To accomplish this they must have the correct colored card in their hand. If they don't they can chose to play the card turned face down and spin the spinner to try to get the correct color. The gladiator then tries to respond with the same colored card or by spinning the spinner to the same color in order to protect the marker. The minigame is over when the gladiator has played all of their cards. Attackboll (Attack Ball, orig. Powerball) In Powerball the challenger tries to place cardboard chits in the receiver by balancing them on a cardboard "spoon". The gladiator has a slightly larger "spoon" with which they try to block the challenger. The minigame ends when the time runs out. Hinderbanan (The Obstacle Course, orig. The Eliminator) The Obstacle Course is the final minigame, the winner takes it all. Players take turns trying to match symbols on a track by turning over cardboard tokens, a bit like Memory. The player with the most points from previous minigames starts and gets a number of markers equal to the difference between the players' scores. That player gets to keep turning over tokens until they fail. If they fail and have no markers remaining, the next player gets to start turning over pieces to try to match their symbols. If they do have any markers, they discard one and keep turning over tokens until they are out of markers. The player who first matches all of their symbols wins the entire game.