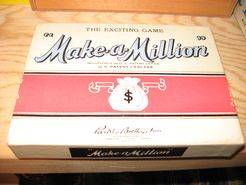 A great economical card game from the turn of the century. The instruction sheet reads "The best game since PIT" on the front. Cards are passed between players as players try to collect complete circles of related society members. Cards have comical names of people within a society, they could call them cliques rather than circles. (examples: Mrs. Get-there, from Butte, Mr. Clymer from Denver and Major But-in (the character who disturbs the social gatherings)) Each circle has a monetary value associated which is paid to the player who collects the entire circle and turns it in to the bank. The player with the most counters (Counters represent $50,000 each) at the end wins the game. The rules are very specific and proper etiquette is enforced!! Typical of the time, early games were designed with religious backgrounds encouraging high sense of morals and etiquette.