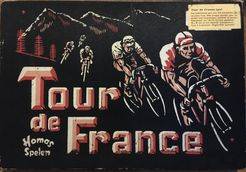 This is the predecessor of "Homas Tour", aka "Um Reifenbreite". Each team managers receives at the start of the game 3x frs. 10,- and 2x frs. 5,-. At the start you move the racers normally as indicated by the dice. At the next turns however you must pay great attention. On the track are places with a special sign (green star, red circle, etc). Some of these places give an advantage, others a disadvantage to the racer who is placed on it. It is your job as a team manager to try and place your racers as much as possible on the advantage places and to try and avoid the disadvantage places. Each team manager should have a list as shown on the backside of the Table for time trial. This list is called the Yellow Jersey Standings.The racers who had the most points in the Yellow Jersey standings, is allowed to wear the yellow jersey (the yellow plastic cap is put over this racer) and he receives an additional fee of frs. 40,-. End of the Tour The end of the sixth stage is exactly the same as the end of the other stages, but only the racer who now wins (or keeps) the yellow jersey is the winner of the Tour and he receives now a fee of frs. 100,- instead of the usual frs. 40,-. There are three ways to win the game: New divison This is the fastest and most simple way, also suitable for children. In this variant one only plays for the Yellow jersey standings. No money is used and the Green jersey score is not kept. The normally quite long playing time is now considerably shorter. At the end of each stage only the points for the Yellow jersey standings are written down and the corresponding racers receives the yellow jersey. The winner of the tour is the one, who has the yellow jersey at the end of the Tour. Amateurs In this variant money isn’t used either (so no fines and/or fees). For both standings are the points written down, so the yellow and green jersey come into play. In both standings will be a winner at the end of the Tour. Professionals This is the Tour de France game in its most beautiful and most complete form. In this variant you use: the Yellow jersey standings, the Green jersey standings and the Banks handles all money affairs such as starting fees, race fees fines, etc. This way of playing costs more time then the two previous ways and it will take about 2 or 3 hours.