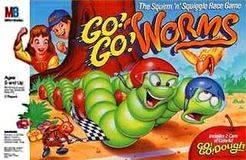 This is a bizarre racing game that uses a "Play Dough" like substance to create worms. Before the game begins, the players use plastic molds to cookie-cut "Grubs" out of the dough and place them into a mutual pile. The racetrack consist of two side-by-side plastic tracks with a finish line at one end and two plastic plungers (shaped like tree stumps) at the other (one for each player's track). On your turn, you roll the die to either race or chomp a worm. If you roll a 1-4, you place the number of grubs indicated into your tree stump and press down the plunger. The dough is mashed and forced out the base in a continuous worm shape over the track. You attach a wheeled worm head to the tip of the dough and add side wheels as needed to support your worm's body. Thus the worms get longer and longer as the race progresses. If you roll a Mr. Chomp, you take a bird shaped device, chomp off the head of your opponent's worm, then place the chomped segment into your tree stump to move your worm ahead. Your opponent must then reattach the plastic worm head to the remainder of his or her worm segment. The first player whose worm grows the entire length of the track, crosses the finish line, and takes the checkered flag is the winner.