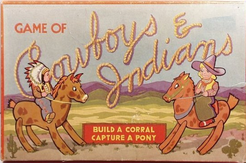 COWBOYS AND INDIANS board game for young players. Build a Corral, Capture a Pony. The directions are 2,3, or 4 may play, each playing from a Cowboy or Indian "corral" as selected, with colored sticks to match. Each player spins in turn. The first player spins the arrow. It if points to a pony, the player places a pony in his own corral. If the arrow points to a color, the player holding sticks of that color, places one stick in his own corral, no matter who did the spinning. This continues in turn until one corral has been completely fenced in. Then all the players count their ponies and the one having the most is the winner.