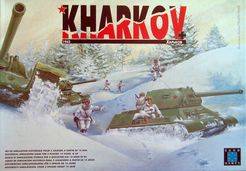 This game is a two in one as it contains all the material for TWO battles of World War 2: Kharkov (1943) and Rostov (1941) both happening in the same corner of USSR. A fourth game of a planned series of six which all use the same rules, on 6 page leaflets. Published in a issue of Casus Belli and then used for a wargame tournament, the last two of the series never saw the light of day. Each game containing the global rules and a sheet of paper with the specifications for the scenario. Three of those 6 games were published by EuroGames: Moskva, Kharkov(Rostov) and Kursk. Strategical scale: Battalion, Division, Army Group. A turn is 4 days long, an hex represents around 10kms. The battle centers around tanks, but Infantry and Cavalry are an important element. Planes and Artillery are simulated with points which affect the game. Weather affects combat and movement as both battles (Kharkov and Rostov) happen in autumn/winter. Russian forces are better prepared for the weather conditions, while German forces are better equipped. Victory is gained by destroying opposing troops and conquering towns to score Victory Points.