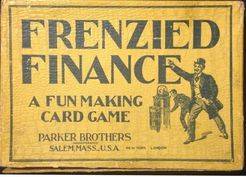 This is an old card game with a stock market theme. A blue-backed deck of stock certificates is shuffled and placed in the center of the table. The top card (called the Boom card) is removed from the top of the deck and hidden under the box. A second deck identical to the first (except that it is red-backed) is then dealt evenly amongst the players who spread them face-up in front of themselves on the table. Each player also receives 10 chips to use as money. The dealer draws the top 4 cards from the blue deck and they are paired up their duplicates from the player's red cards and removed from the game. Then a trading round commences in which players may buy or sell their red cards at whatever price in chips they can agree to. After 3 minutes, the trading round ends and another 4 blue cards are drawn, paired, and removed from the game, followed by another round of trading and so on. When only 1 red card is left, it is paired with the Boom card and a scoring round begins. The player in possession of the Boom card scores 25 points. In addition, all players score 1 point for each chip they have in excess of their starting 10. The cards are then dealt again for a new hand. The game is won by the first player scoring 75 points.