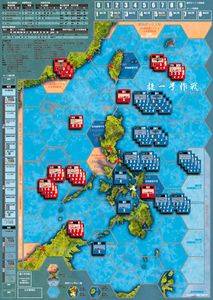 LEYTE GULF NAVAL CHESS GAME is a relatively fast and simple combined operations game about the decisive Allied offensive in the Pacific: the liberation of the Filipino people from Japanese occupation in October 1944. This was a dramatic, decisive battle of annihilation, particularly at sea. Thanks to the Japanese Navy's brilliant plan tailored to Allied -- specifically, Admiral "Bull" Halsey's -- aggressiveness, the Imperial Japanese Navy was on the brink of massacring General Douglas MacArthur's Liberation forces ... until valor and determination (and superb training and equipment) prevailed over the skill and savage ruthlessness of our enemy ... which we were compelled to match ... to win and survive. This is an excellent 3-player game -- 2 Allied players (who are not allowed to communicate with each other after the game begins) and 1 Japanese player. (Designer's blurb)