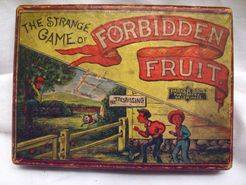 This old card game plays similar to Go Fish. There are 10 different kinds of fruit (30 cards - 3 of each type) with a guard for each. The guard with the 3 cards it protects forms a set. The cards are distributed equally amongst the players. On a turn, you may ask any player for a fruit provided that you yourself hold either a fruit or the guard from that set. If the player has the fruit asked for, he must give it up, unless he has the guard of that fruit; for example, if one player asks another for an apple which he has, if he also holds the dog, he may refuse, saying, "My apples are guarded by my dog." You continue calling for fruit until you call on a person who either doesn't have any or has the guard for that set. Once stopped, all players draw 2 cards from the player to their left. Guards cannot be called away, but since they are frequently passed, their location is often doubtful. When you collect all 4 cards in a set, you lay them down in front of you. The player with the most sets at the end is the winner.