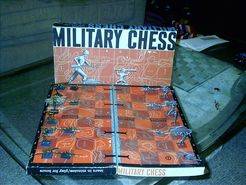 An abstract military-themed game. Uses a modified 64-square chess board divided by a river crossable at four bridges. Each side also has two minefields on its side of the battlefield. Each army has 12 hard plastic pieces depicting various soldiers or weapons. There is a "General" (chess King), two "Cannon" (moves like a chess king but can "fire" at enemy pieces up to three squares away instead of moving), one "Tank" (chess Rook), one "Bazooka-man" (can move up to 3 squares in any direction), one "Jeep" (same as the Bazooka-man), two "Infantry" (can move up to two squares in any direction) and four "Advanced Guard" (can move up to two squares in any direction EXCEPT backwards.) The object of the game is to eliminate the opposing general or move your own general to the other end of the board. The game was originally marketed by A.N. Meyers &amp; Co. (London) as a "New Game for the Chessboard" in the 1880's.