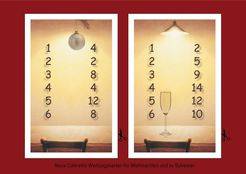 Coloretto: Zwei Neue Übersichtskarten is a tiny expansion for Coloretto consisting of two new scoring cards. Before the game begins, players decide (or choose randomly) which of the scoring cards to use in place of the one in the base game. Two different pairs of new scoring cards exist, and both can be downloaded from designer Michael Schacht's website.