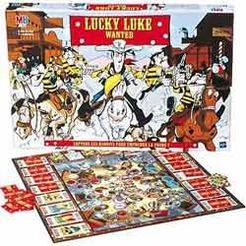 Players are Sheriffs trying to capture outlaws and collect reward money. The roll of two dice is split on each turn. One die is for movement, the other corresponds to one of six event cards. Players move from space to space, trying to find the exact hat/kerchief color combination matching the wanted bandit. Notes are kept as players deduce the whereabouts of each outlaw. Event cards can penalize players by eliminating outlaws or restricting a player's movements, or reward them with a free peek at a bandit card. When all bandits have been captured, the player with the most reward money wins.