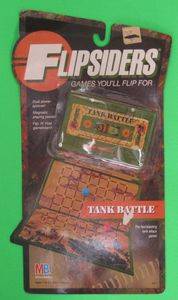 Not related to the other Milton Bradley game of the same name, Tank Battle is one of the "Flipsiders" games that resembles an audio cassette until you "flip" the game open. The object is to destroy the other players tank. On a turn you spin the 2 spinners. Spinner A tells you how far you must move. Spinner B indicates how far you can fire. All firing must be done in a straight line (i.e. you can't shoot diagonally). If spinner B points to a number that is greater than the number of spaces between you and your opponent, you score a hit. Each tank has 7 hit points. Blow up your opponents tank to win the game.