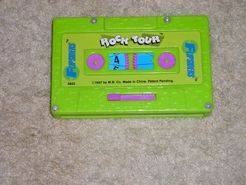 Rock Tour is one of the Milton Bradley "Flipsiders" games that resembles an audio cassette until you "flip" the game open. Players take on the roles of rock-and-rollers trying to be the first to finish their tour schedules. A City List track lists all the places where concerts can take place, while the board depicts a map of the world with travel paths to all the concert locations. Using a spinner for movement, you travel on the world map trying to reach one of the next two cities shown on the City Track list. If you do, you advance your City Track marker to that space. The first person to reach New York on the City Track finishes the tour and wins.