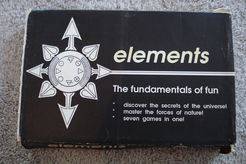 "The four ancient classes of earth, air, fire, and water combine with the discoveries of modern science to create: elements." Basically a deck of 120 cards divided into 4 suits (earth, air, fire, and water), 28 cards per suit, plus 8 special "aspect" cards (Adam, Eve, Dragon, Phoenix, Unicorn, Leviathan, Philosopher's Stone, and Abyss). Cards are valued 1 to 7 and each is named with a modern element (hydrogen, helium, lithium, and so on). Cards also have directional arrows (N, S, E, W, etc.) that are used in some games. Rules included for 7 different games, each an original variant of traditional types of card games: Gnosis: Be the first alchemist to attain the knowledge of how to transmute lead to gold. Somewhat like multi-player solitaire with a "take-that" element. Directional Dervish: Capture the most cards. Reminiscent of dominoes. Elemental Chess: Win the battle by capturing both of your opponent's aspects. Like it's name, inspired by chess but played on a board made out of cards and with cards as "pieces". Alchemical Warfare: Capture the most cards. Hard to think of a comparison, but a bit like icehouse (place cards with arrows pointing at your opponents' cards and try to capture them. Chemistry Clash: Bond elements using valance numbers. A version of rummy. Particle Poker: Win the most chips or counters during an evening's play. As it says, a version of poker.