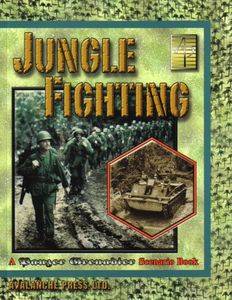 This supplement for the Panzer Grenadier system introduces the U.S. Army's role in fighting the Japanese. Jungle Fighting includes 42 scenarios from the Guadalcanal campaign. Most of these feature Army troops, but there are also several from the deep penetration carried out by Marine Raider companies behind Japanese lines. The back of the book is covered by a map of Butaritari Island, also known as Makin Atoll. One of the scenarios covers the August 1942 attack on the island by Marine Raider troops. There’s also a lengthy background piece on the Guadalcanal fighting, putting all of these scenarios and those from Semper Fi: Guadalcanal in their proper context. This is an expansion supplement and not a complete game. This game is part of the Panzer Grenadier series