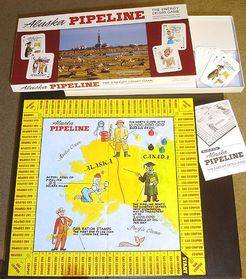 From the game box: This game involves a little old lady and her attempt to prevent the pipeline from being built. During her campaign, the public goes through an energy crisis and the oil companies leave Alaska. Another character in the game is called the little professor, and it’s his job to answer all of the objections to the pipeline. The objective of this game is to refute the attacks on the pipeline then get the permit to build it. Played with cards on a board, which contains the map of Alaska, the scoring spaces are gas-ration coupons. Use the least amount of gas-ration coupons and win the game. Pipeline comes ready to play. It includes a game board, game pieces (6 pawns), rule sheet and 52 playing cards. additional from the 1990’s reissue box: The first game based on the energy crisis came out in 1973. Called Alaska Pipeline referring, of course, to the source of oil we were hoping to receive from Alaska. The Trans-Alaskan Pipeline was completed in 1977 and we have been utilizing the oil since then. Now, nearly three decades later we are faced with yet another energy crisis and it’s time to play the game again. -- The games underlying purpose is (was) to educate and create support for the Alaska Pipeline to be built, and it does it by placing facts, opinions, events, and objections about The Pipeline onto playing cards – the game, in mechanics reality, is actually really just a Hearts card game variant, and the board’s 100 “gas-ration coupon” spaces simply represent the scoring total. 4 suits of cards (“Oil Company”, “Objection”, “Fact”, and “Public” – 13 of each) represent the four suits. Players gain/use “gas-ration” points by getting stuck with the “Objection” cards during trick taking (which are 1 point each, like the hearts suit in Hearts), or the “Oil Company” Pipeline Permit card (which counts as 13, like the queen of spades in Hearts). Players move their pawns up the board the number of points acquired after each round. Though, if one player can take them all (the 13 “Objection” and the Pipeline Permit card) they can either advance the other players 26 points, or deduct 26 from their own total and move back on the board. This game also includes the Native Land Claims "Fact" card allowing the trick taker to deduct 10 points (i.e. like the jack of diamonds variant in Hearts). After the first player reaches 100 gas-ration coupon points, they lose and the game is over and the player with the lowest gas-ration points wins. There are also rules for 3, 5 and 6 player games.