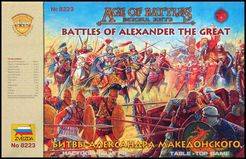 Based upon the Age of Battles MINIS gaming system, this one includes 161 of their excellent 'minis', to include War Elephants(!), Chariots, Greek and Persian Infantry, Cavalry, etc. Along with the various other items that comprise the components for the "Age of Battles" game sets. You would think that the "C &amp; C-Ancients" people would've have collaborated with these MINIS makers, to produce a much more appealing approach for THAT, and it's not like WE can't combine those for ourselves. From the back of the box: The military historical game "Battles of Alexander the Great" is based on the events of the Hellenic campaign to the East. In the spring of 334 BC the united Hellenic army invaded the Persian kingdom. Battles followed one after another. Battles of different peoples tried to resist the conquerors: Persian bowmen, Scythian cavalry, Indian elephants. The game has five scenarios of the most important battles. Two to six players can participate in the game. The combat characteristics of the armies are close to historic. Tactical maneuvering by regiments is of great significance in the game. A skillful commander can bring an army to a victory over an out numbering enemy. The kit contains six scenarios, each of them making you able to reproduce a historic battle or try to change it. In any case one needs to win not only by number, but also by skill. Zvezda 8223