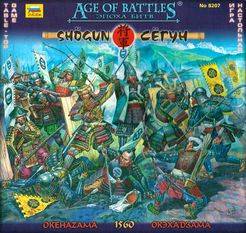 This one takes place in Japan using the "A.o.B" system with the great MINIS and I'd expect to see MORE 'Expansion' packs for them! Then maybe, those 'Mongol hordes' just might make it upon the island shores during a successful "Invade Japan!" game session. Description from the back of the box: The military historical game the Battle by Okehazama is based on the events that took place June 1560 in Japan, at the height of the Fighting Provinces period. It was the time when all the Japanese Samurai clans clashed in the combat for power. In the battle by Okehazama the small army of the Oda clan defeated the lmagawa troops by sudden attack. A new general Oda Nobunaga entered the combat for power. This game is for 2-6 players. The enemy armies led by the players meet near the bay of lssa, in the valley of the Pinar river. Battle characteristics of the armies are close to the reality. Tactic maneuverings are very important in the game. Under a skillful leader a smaller army can defeat numerous enemies. You can either recreate the historic battle or change the course of the fight. Anyway you should rely not only on the number of your army but also on your leadership and war skills.