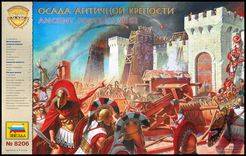 Not to be confused with the other "Fortress Besieged!" game [What other "Fortress Besieged!" game?]. This one appears to be of sturdier materials, such as simulated stone, while that other kind was some sort of wooden palisades. It also contains the miniatures and game system from Age of Battles. Those with little desire to amass whole countries of hand-fashioned locales can use this; however, more industrious people may supplement the system, as well. Part of the Age of Battles table-top miniatures gaming system using 1/72 scale miniatures, Ancient Fortress Siege adds siege engines and fortresses to the Age of Battles game system. From the back of the box: In ancient times stone fortresses were spread both in Greece and in some regions of Persia. Hoping to defend themselves the Greeks who lived in cities situated in Asia Minor would surround their cities by strong stone walls. But nevertheless siege engines and briberies made them depend on a Persian king. Manifold tries to free a city caused new Persian intrusions and assaults of rebellious cities. Those Greek cities that helped rebels also suffered invasions of the Persian king Xerxes, but they survived. Having repulsed this invasion, the Greeks undertook their own march in return. Since then the Asia Minor cities and fortresses being defended by Persian garrisons would often see Greek attacks. Thus the Greeks could defend one and the same city from the Persian army and then the Persians would defend it but this time from the Greek and Macedonian armies. Zvezda 8206