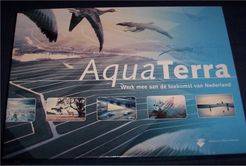 Subtitle: "God created the world, but the Dutch created Holland" Description: Help build the future of the Netherlands. With AquaTerra. As a Project leader, deployed by the Ministry of Transport, Public Works and Water Management, you realize prestigious projects. To do this, you must have technical, economical, judicial and political "expertise". Use these expertise’s in an optimal way to realize your projects. But be ware! Unforeseen events will cause you to adjust your plans and cooperation is necessary. The project leader that uses his expertise’s in the best way, wins. Good Luck! Box contents: The box contains a manual, a custom game-board, a small cloth bag (just large enough for an adult hand), 40 expertise chips, 30 play-cards, 14 project tiles, 4 score markers, 4 plus-tokens, 1 die, 1 die-shaped round-marker. The board depicts the Netherlands in a Geo-thermal style, with a grid overlay. The grid shows project locations, matching the 14 project tiles, coded 'Project A' through 'Project N'. Every project square shows the potential maximum points that a single player can gain from that project. Game Play: Lay project tiles on a board, and surround them with expertise tiles. When a project has enough expertise, it is completed, and the player that contributed the most expertise wins. During their turn, players throw the die and move the round-marker along the game-board as many spaces as the die indicates. Depending on the place the round-marker ends on, one of several things may happen. Sometimes a project tile may be drawn from the draw bag and placed on the board. Or the active player may draw one expertise chip from the faced-down set and place it on the board. In order to do this, they must move their score marker backwards on the track as many places as is indicated on the expertise chip that they have drawn. Another option would be drawing a play-card, which are similar to Monopoly chance cards. When a project has enough expertise added to it (by placing expertise chip next to it) players see who gets how many points from their contributions. They then move their score marker forwards on the track the same number of points that they have collected from the project. The expertise chip attached to the project do not recycle back into the draw pile. The game ends when either a per-determined number of rounds (based on the number of players) has been played or when all projects have been completed or when all expertise chips have been used up. Note: This game was supported by the Ministry of Transport, Public Works and Water Management.