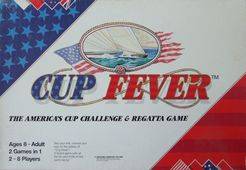 Yacht Racing to compete in the America's Cup (played in pairs) or a Regatta (individual). Each player controls a yacht and races to be first around a course. Movement rates are determined each turn by the sum of two dice, the yacht can either move one square (or half a square if moving against the wind)or play a card. Cards are played to change the direction of the yacht or the direction of the wind. Cards are replenished at the end of the turn. There is some scope for clever play (e.g. sailing across an opponent's bows and forcing a turn away, or changing the wind against them) but it is mainly luck driven.