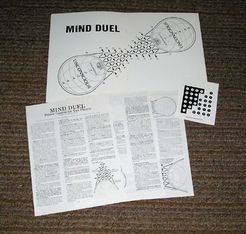 Mind Duel - Psionic Combat for Two players In issue #4 of the magazine "VIP of Gaming". "Mind Duel is a game of psychic combat between two trained telepaths. You attack your opponent's mind and defend your own, with focused bits of psionic energy...By invading your opponent's mind, you may stun your enemy, or pinch a pressure point and cause the loss of those focused bits of psi-power. Your object is to occupy the opponent's conscious mind, whereupon the enemy will black out, never to awaken again." Game consists of the rules, gameboard and cut-apart counters found in the magazine and 2D6. The gameboard represents the telepaths' minds and the area of mental struggle between them. Each mind is divided into conscious, subconscious and unconscious levels (the "mental arcs"). The area between the battling minds is divided into a series of wavelength arcs. Basic Play: 1-Announce your attacking pieces (pieces that will move). 2-Pieces not moving then "decay" (fall back due to lack of support). 3-Move the attacking pieces. 4-"Shift" if you choose and are able. 5-Apply any attack results. Sending a piece into your opponent's mind is an attack. Attacking the Unconscious stuns the opponent for one turn. Attacking the Subconscious permanently eliminates your opponent's furthest advanced piece. Attacking the Conscious defeats the opponent and wins the game.