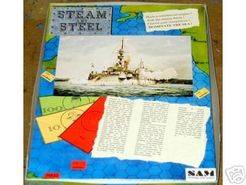 Quoting from the review at http://flyhi.de/games/dampfundstahl1.html: Steam and Steel is a game of naval power and economy; the objective is to gain the commercial and military superiority on the oceans. The crucial areas, or rather points, of the map are the ports, and the units at the player's disposal are his warships. The winner is the player that controls the largest port capacity at the end of the game, i.e. after a certain number of game turns or a predetermined time. "Players gain income from their ports. They spend their income for increasing port capacity, fortifying ports, building shipyards, and building ships. Ships have no inherent value towards the objective of the game, but they are necessary to protect the bases. New technology makes older ships obsolete, forcing players to constantly upgrade their fleets. "When opposing ships or fleets meet, or ships enter a fortified port, game play switches to short interludes of tactical battle." Expanded by: Steam and Steel: Expansion Set 1