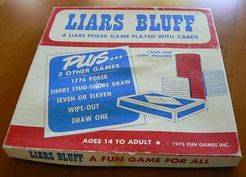 Very similar to Liar's Dice. Instead of rolling dice, players are dealt cards with poker hands on them. Examples: Jack-high hand, a pair of sevens, four queens. There are no straights, flushes, or full houses, only a specified card and the number of copies of that card in the hand. Each player is dealt the same number of cards (1 - 7). Players then bid on the combined hands of all players. A player that bids seven kings is betting that there will be seven or more kings total in everyone's hands. To bid, each player must bid either a higher number of matching cards, or the same number of a higher ranked cards. (So, to overbid seven kings, bid seven aces, or eight or more of anything.) When players think someone has bid more than the cards will support, they call "liar". Once everyone around the table has called "liar" rather than keep bidding, the cards are shown. If someone is called a liar, but the cards prove him right, he wins the pot of chips accumulated during the bidding. If he loses, the chips remain in the pot for the next hand.