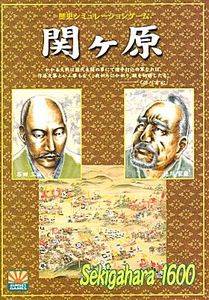 This is the biggest battle of Japanese medieval times. Sekigahara 1600 contains 528 pieces , 282 cards , a 59 x 84 cm map (printed in Japanese) and 34 pages of rules(in Japanese). The center of Honshu Island is printed on the map. Turn length is three days and units are 1000-1500 soldiers. Player numbers are two and playing time is from five hours. Solitaire Suitability: Low (on a scale of Low-Medium-High) The Game: "Sekigahara 1600" is reprint of Epoch's The Battle of Sekigahara. This game was originally published by Epoch games in the 80s.